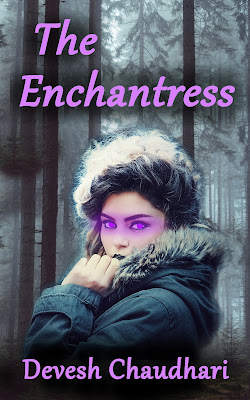 Summery:
Story revolves around Daniel Grey, when moves in new town to start new life and he made some new friends. One day He found an old extremely rare violet diamond locket in his attic of his house. He begins to have scary paranormal encounter due to crystal powers of violet diamond, later he met a beautiful girl named Olivia who is a powerful Enchantress. The story gets more complicated when Daniel discovers that Olivia is a ghost who is haunting him because she has madly fallen in loves with him and she had her own evil plans for him. The violet diamond is cursed by Olivia before her death and destroying the violet diamond locket is the only way to stop Olivia.
Join the Adventure of Daniel Grey on his journey to break the curse of Olivia !!

Book Available for FREE on:

Popular posts from this blog

July 12, 2014
We spend a third of our lives doing it. Napoleon, Florence Nightingale and Margaret Thatcher got by on four hours a night. Thomas Edison claimed it was waste of time. Why do we sleep? So why do we sleep? This is a question that has baffled scientists for centuries and the answer is, no one is really sure. Some believe that sleep gives the body a chance to recuperate from the day's activities but in reality, the amount of energy saved by sleeping for even eight hours is miniscule - about 50 kCal, the same amount of energy in a piece of toast.
Post a Comment
Read more

June 25, 2014
Alien hand syndrome, (AHS) is a rare neurological disorder that causes hand movement without the person being aware of what is happening or having control over the action. The afflicted person may sometimes reach for objects and manipulate them without wanting to do so, even to the point of having to use the healthy hand to restrain the alien hand. Patient suffering from AHS feels that one's hand is possessed by a force outside of ones control and feels sensation in the affected hand but thinks that the hand is not part of their body and that they have no control over its movement, that it belongs to an alien. Hence, syndrome is name as Alien hand syndrome. The first case of AHS was reported 1908 in German by the preeminent German psychiatrist, Kurt Goldstein. Goldstein described a right-handed woman who had suffered a stroke affecting her left side from which she had partially recovered by the time she was seen. However, her left arm seemed as though it belonged to another p
Post a Comment
Read more

July 11, 2014
Sleep deprivation can cause schizophrenia like symptoms Twenty-four hours of sleep deprivation can lead to conditions similar to the symptoms of schizophrenia in healthy persons, a new study has found. A team led by researchers from the University of Bonn in Germany and King’s College London said that after 24 hours of sleep deprivation in healthy patients, numerous symptoms were noted which are otherwise typically attributed to psychosis or schizophrenia . “It was clear to us that a sleepless night leads to impairment in the ability to concentrate,” said Professor Dr Ulrich Ettinger of the Cognitive
Post a Comment
Read more